Of the spectrum of metallic instrumentation techniques developed in spine surgery, pedicle screw fixation has gained the most popularity. As the technique and technologies for placement of percutaneous pedicle screws have progressed, so have the indications for their placement.  Most surgeons will use percutaneous pedicle screw fixation as an adjunct to an anterior or posterior minimally invasive procedure. However, one indication used in our practice is for patients who suffer from spinal fractures that, unfortunately, either cannot tolerate external bracing or do not want to lose the extra motion segments in their spine by undergoing a permanent spinal fusion procedure. The placement of percutaneous pedicle screws effectively acts like an “internal bracing” system which, after the fracture heals, can be removed without any long-term consequences.

A 21 year old woman presents to the emergency room following a motor vehicle accident. She has severe back pain but is neurologically intact on examination. A work-up reveals an L1 stable burst fracture (Figure 1). The patient is placed in a rigid brace but cannot tolerate wearing the brace because it exacerbates her fibromyalgia thus resulting in intolerable amounts of back pain. Given her young age, the option to “internally” brace the patient with internal fixation is chosen with the plan for scheduled hardware removal once the fracture has healed. The idea of fusing a minimum of two to three levels of her spine is a less ideal choice. Surgery is completed the following day with minimal blood loss and she is discharged home one day later without a brace (Figure 2). Approximately 12 months after placement of the internal hardware, it is removed as scheduled (Figure 3). The patient remains with motion above and below the fracture level with no consequences to the procedure except for the small stab incisions on her skin (Figure 4). 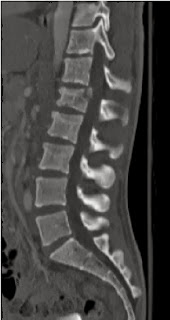 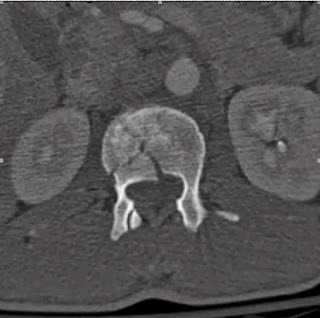 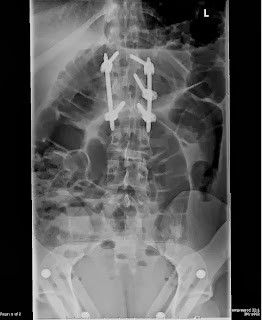 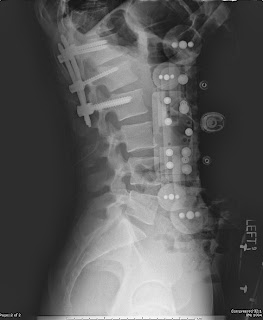 Boulder Neurosurgical & Spine Associates is excited to be a part of the ACADIA® IDE (investigational device exemption) FDA-controlled clinical trial investigating a facet joint replacement system. While many spine related problems can be treated nonoperatively, some spine conditions do require surgery. Our goal at Boulder Neurosurgical Associates is always to find the least invasive option for our patients. Many of these options include simple outpatient procedures where we un-pinch a nerve or remove a herniated disk. Disk herniations and spinal stenosis can be treated quite effectively in this regard, but there are other times when there is intrinsic instability of the spine and spinal stabilization is considered. This often requires spinal fusion surgery where screws and rods are used to attach two or more bones of the spine together after the nerves are un-pinched.

The surgeons at Boulder Neurosurgical Associates continuously try to help our patients maintain an active lifestyle and we strive to offer our patients the most technologically advanced and state-of-the-art procedures. The purpose of this study is to determine if the ACADIA® Facet Replacement System is effective in the treatment of spinal stenosis. Spinal stenosis continues to be a major cause of back and leg pain. The condition is attributed to narrowing of the space around the nerves in the lumbar spine. This is often caused by the degenerative process in the spine and the facet joints. The current treatment calls for removal of bone around the affected nerve including the facet joints and fusing the posterior of the spine to ensure the segments remain stable. The ACADIA® Facet Replacement System allows us to replace the facet joints with the device instead of having to fuse the bones together. As this is an investigational device, trial participants would be enrolled and randomized to treatment, as necessary. Facet joint replacement and participation in this trial is not appropriate for all patients, but we would encourage you to contact us if you are interested in this exciting new technology. All of the surgeons at Boulder Neurosurgical & Spine Associates are participating in the trial and would be happy to schedule a consultation with you to discuss it further.

For more information on the ACADIA® clinical trial, please visit http://www.bnasurg.com/treatments-facet-replacement.php or call us at 303.938.5700. Consultations can be scheduled by calling 303.938.5700.
Posted by Unknown
Labels: Research
Email ThisBlogThis!Share to TwitterShare to FacebookShare to Pinterest
No comments:

Deep Brain Stimulation (DBS) is a surgical treatment for movement disorders such as Parkinson’s disease (PD), essential tremor (ET) and dystonia. In Parkinson’s disease, DBS is best suited for patients whose medication fails to provide adequate symptom control or in whom medications cause intolerable side effects. Parkinson’s patients who undergo DBS typically experience a dramatic reduction in their medications and more consistent motor function. They typically have a more fluid movement without the highs and lows of medications wearing off.  DBS will reduce rigidity, improve bradykinesia (slowness), improve akinesia (freezing) and diminish tremors. The dyskinesias usually resolve due to medication reduction. DBS is also very effective for patients with essential tremor, eliminating the need for medications and reducing tremor by 60-90%.

DBS provides a constant, high frequency electrical signal to a specific area of the brain, which overrides the abnormal circuitry in the brains of patients with movement disorders, providing therapeutic benefits for many symptoms associated with these diseases. More information about DBS is located on the Boulder Neurosurgical & Spine Associates (BNA) website.

Some common concerns and misconceptions about DBS are addressed below:

Consultations can be made by calling 303.938.5700.
Posted by Unknown
Labels: Movement Disorders
Email ThisBlogThis!Share to TwitterShare to FacebookShare to Pinterest
No comments:


Sara is a mother of four and a marathoner whose back pain eventually resulted in an L5-S1 artificial disc replacement surgery, after more than 10 years and two microdiscectomy surgeries performed by prior doctors.


After months of physical therapy (PT) and several cortisone shots Sara started to lose feeling in her right foot and eventually underwent a discectomy surgery to correct a herniated disc at L5-S1. Her back pain, leg pain and numbness decreased for a few years and she began to run again and started to swim competitively. However, the back and leg pain returned with more intensity the more active Sara became, wherein she continued PT and cortisone shots for several years. In 2006, Sara underwent another discectomy and also had several nerves cauterized to address the leg pain. She quickly recovered, but maintained leg pain and significant back pain. Sara continued to swim intensely but had to stop running completely. Between 2006 and 2011, Sara’s physical activity level continued to decrease and eventually she was unable to do much of any physical exercise without debilitating pain. She was forced to stop swimming and was restricted to short walks and very limited time on the elliptical and stationary bike. It became extremely difficult for Sara to get dressed each day and she would often crawl to the bathroom in the morning. Sitting and standing for more than 30 minutes resulted in extreme back pain as well.


Throughout the years Sara saw six different surgeons and doctors and most suggested to have her back fused at L5-S1. Sara began researching alternative surgical treatment options and discovered the artificial disc procedure available at Boulder Neurosurgical & Spine Associates (BNA). Seemingly very happy to finally be at BNA, Sara had the procedure done and is now “100 times better than before surgery.” After one day in the hospital she made an incredible recovery. Sara now runs more than four miles per day, four days a week, and swims 3,000 meters, three times a week. She no longer has difficulty getting dressed, wakes up each day and walks to the bathroom and has traveled to Africa for business with absolutely no back pain resulting from the 18-hour flight.
Sara before surgery, showing severe L5/Si disc degeneration and collapse. 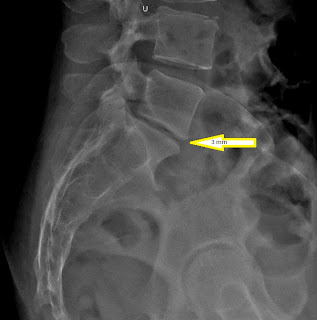 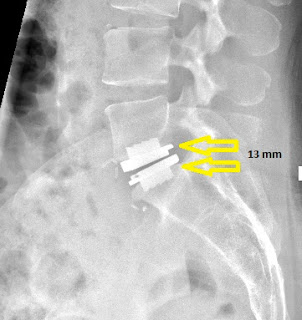